​4-H was first started in Linn County in 1918 with eight boys and girl’s clubs with 115 enrolled.  Clubs were project based and there were centered around baking, sewing, pigs, cattle and canning.

In 1923 there were community Achievement Days where items were brought together and selected to the State Fair in Sedalia.  Then on October 27 a final achievement day with the Farm Bureau Fall Festival when 129 articles were exhibit for premiums.  And the blue ribbon articles were sent to Boys and Girls Club Congress (in Columbia).
​1930 saw over 200 at the local 4-H Round-up held at the Linneus City Park.
1934 – the first county-wide calf show since 1922 was held at the Purdin Fair with 17 calves shown. 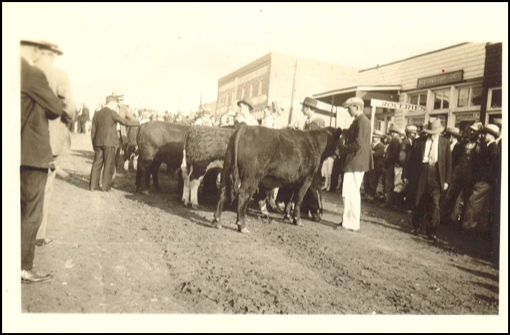 1936 - A record breaking crowd of 750 persons attended the Annual 4-H Round-Up in the City Park at Linneus.  The Laclede businessmen held a county 4-H Fair.

​1938:   A 4-H Fair was begun at Brookfield this year with much the same idea as the Laclede Fair but with much larger awards with the businessmen of Brookfield, along with other groups, contributing.  Club leaders constructed most of the pens, shelves, and booths for the exhibits.  The Fair got wide-spread publicity in all the county newspapers before and after the Fair.  The most unique thing about the fair was that there were no concessions for entertainment of any kind sold, and everyone was busy from early morning until evening programs closed.

​1949 - For the first time the county 4-H Fair was held in Brookfield at the Rodeo grounds.  A large parade was the kick-off for three days of great activity.
Proudly powered by Weebly